Top 5 Most Famous Tartans That Bagpipers Wear in Scotland 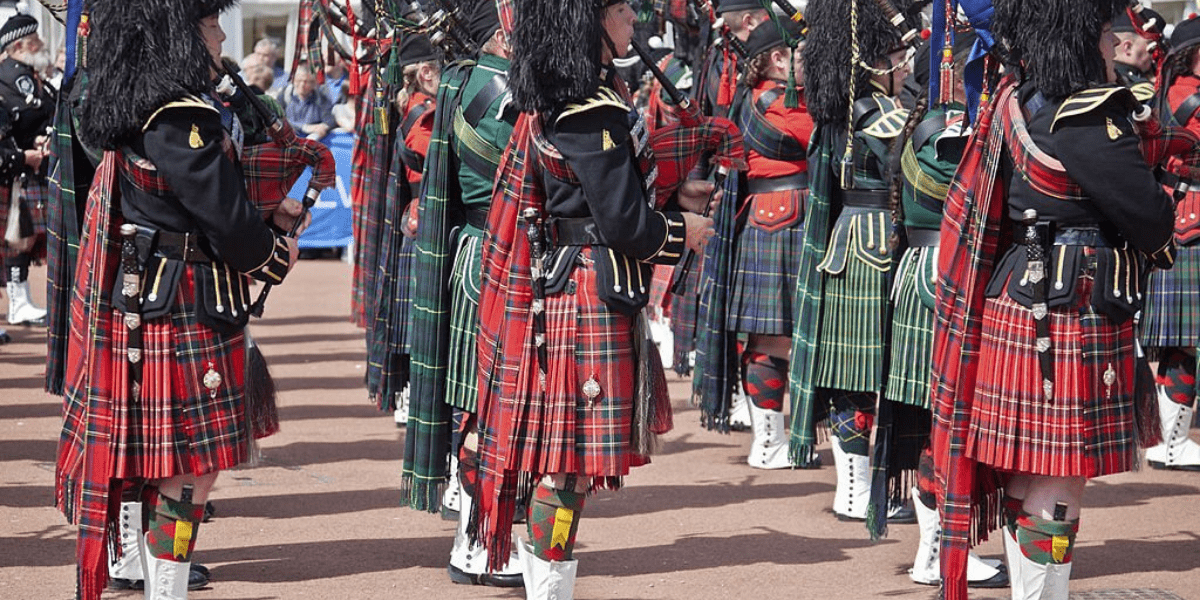 As a Scottish cultural export, tartan goes well with whisky, shortbread, and, its closest allies the kilt, and bagpipes. One of the oldest bagpipes in existence comes from Scotland and is called the Great Highland Bagpipe. They started off with their instruments and a Tartan. There are many unique Scottish festivals and events that one doesn’t hear about very often, which includes their bagpipers who wear famous tartans! This truly is an important part of Scottish culture. Not only does it sound beautiful and it no doubt plays a big role at many kinds of parties and family events. We picked some of the tartans that mostly bagpipers wear to discover the fascinating stories behind five of Scotland’s most popular tartans.

Royal Stewart tartan has rock ‘n’ roll status as a fabric worn by punks, pop, and glam rock stars, and is probably the most recognizable tartan in the world. In fact, there are more than a hundred Stewart tartans registered in the Tartan Index but there is only one that anyone needs to know about: Royal Stewart. The Royal Stewart is distinctive because of its red, green, and white stripes which appear on everything from Scotch bonnets to shortbread tins. This tartan was perhaps favored by punks and is the queen’s official tartan.

The bright yellow, black, white, navy blue, and forest green of the Dress Gordon Tartan Kilt is bold, vibrant, and commands attention, making it the choice of tartan for fashion designers. Who wishes to make a daring statement truly inspired by the Black Watch military tartan. With this tartan pattern, you can make your clothes more stylish and elegant. Coving with a wide selection of quality kilts. jackets, skirts, and other clothes made of this gorgeous Dress Gordon Tartan.

With its dark green, navy blue, black, red, and white sett, Mackenzie Tartan Kilt is one of the most striking tartans ever. It’s easy to dismiss the Mackenzie tartan as being simply a regimental pattern. The material of this Tartan has been woven to match the original piece dating from the 1820s having the white stripe initially thought to have been of silk woven with partly a cashmere interface.

Gordon Modern Tartan Kilt represents a beautiful color combination of dark green, navy blue, black and yellow. If you want to make a style statement with your clothes, why not get yourself something made from the Gordon Modern Tartan? Kilts, skirts, jackets, and other quality garments are made with this fabulous tartan material that is known for its exquisite stitching and quality.

Saffron Tartan Kilt was first worn by Irish and Scottish soldiers serving in the military during World War I and II. These colored kilts have mustard yellow in color and often has shamrock appliques adorning the pleats and are of a distinct hue that is brighter and more vibrant than any others. Today, it’s the most widely worn kilt in Ireland. The amazing thing about this Tartan Kilt is it’s a non-wool kilt that you can easily wear at indoor and outdoor events.

Free For All Bagpipe Images.

What do you call bagpipers?

Someone who plays the bagpipes is called a piper.

Is a bagpiper Irish or Scottish?

Bagpipes, A Symbol of Scotland

But, whoever invented them, the Scots have pretty much made this instrument their own over the years. However, the Irish also lay claim to playing an instrument that is similar to the Scottish version. The national bagpipe of Ireland is as much a tradition as their Scottish counterparts.

What is a Scottish bagpiper?

The Great Highland bagpipe (Scottish Gaelic: a’ phìob mhòr pronounced [a ˈfiəp ˈvoːɾ] lit. “the great pipe”) is a type of bagpipe native to Scotland, and the Scottish analogue to the Great Irish Warpipes.

Are bagpipes banned in Scotland?

Bagpipes were been banned in Scotland in 1560 after the Reformation. It is often said that they were banned again in 1747 after the Battle of Culloden, although this is debated.

Can bagpipes play in any key?

Highland bagpipe music is written in the key of D major, where the C and F are sharp. Due to the lack of chromatic notes, to change key is also to change mode.